Money and welfare Career and office wars Love, partnership, marriage Self-identification and the search for oneself Urban Tarot My place: the energy of your home Energy, responsibilities and debts Where does the energy go? Scanning ourselves Building a safe energy environment How does Tarot work? Может ли Таро предсказать политические события? Таро и церковь Tarot Royal Court Wheel of the Year Moon calendar Clients' stories
Main › Blog › Urban Tarot › How does Tarot work?

How does Tarot work? 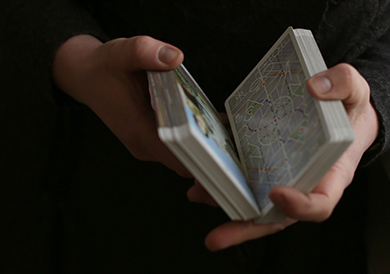 Tarot reading is an ancient European tradition, woven into Western European culture and philosophy starting from the late Middle Ages up till our days. Re-searchers still partake in heated debate as to who was the first to bring the cards to Europe – some look for the roots of the tradition in Ancient Egypt, others trace them back to China through Middle East, making a connection with the crusaders who brought many cultural and intellectual traditions of the Saracens to Europe. Either way, the earliest of the preserved Tarot decks is the Visconti-Sforza deck created for the engagement of Francesco Sforza, future Duke of Mi-lan, and Bianca Maria Visconti, in 1432. At the time, Tarot cards were already popular among Italian nobility – both as playing cards and later as cards for reading.

Tarot cards have made a long way from the Medieval nobility and clergy to the offices of consultants in modern megapolises, such as London, Paris and New York, having remained virtually unchanged – the number of cards, arcanas and suits as well as the symbolism of personalities and situations in the decks created in the 21st century are identical to that of the Visconti-Sforza deck. So why is this combination so steady and has survived almost 600 years of testing? Carl Gustav Jung, a philosopher, psychiatrist and founder of one of the branches of modern psychoanalysis, believed that Tarot was the embodiment of the archetypes of collective unconscious and was the most accurate reflection of the universal stages of life path and persons we can meet on that path. Similarly, to the repeated images from our dreams, the images from Tarot cards evoke levels of understanding of ourselves and the world, previously hidden from us by the caring consciousness, which is so fond of avoiding sensitive issues and unpleasant truth.

I am neither Jung's fan nor follower, yet I am absolutely convinced that modern Tarot is closely linked with psychology and the images from cards indeed help us look inside ourselves, focus on life situations, sort out our life and the things around us.  Then, the cards give advice which may become decisive on the way to happiness or success. It's no wonder that the "powers that be" – entrepreneurs, politicians, business owners and celebrities do not shy away from consultations with Tarot readers. Unfortunately, in our culture Tarot readings are often associated with a stuffy kitchen and grease-seared cards in the hands of a suspicious fortune-teller. However, if we look at an office of a modern Tarot reader in any of the world’s capitals, you will be surprised to see a space which is hardly different from an office of a psychoanalyst or gestalt therapist.

How do the cards "know" the answers to our questions? Nobody can give an exact answer, but I think it lies somewhere on the cross-roads between psychology and esotery. When talking to cards, we look deep inside ourselves and simultaneously touch upon other strings of the universe. Some might say that the Tarot effect is connected with the principles of synchrony or single information field, and with the help of cards we can "tap into" it and interpret its answers correctly. I will not try to identify the nature of Tarot, but my experience and practice – both personal and that of my clients – have amassed numeral examples of infallible intuition and forecasts given by the cards, that I cannot doubt the truthfulness of what they say.

One way or another, even for people who are a far cry from the esoteric practices, Tarot reading is a great opportunity to focus on their state of affairs in a calm environment and ask themselves all the right questions, discuss problems, which they will hardly raise with partners or friends, expand their tool set and listen to a view from the outside, which we so often lack.